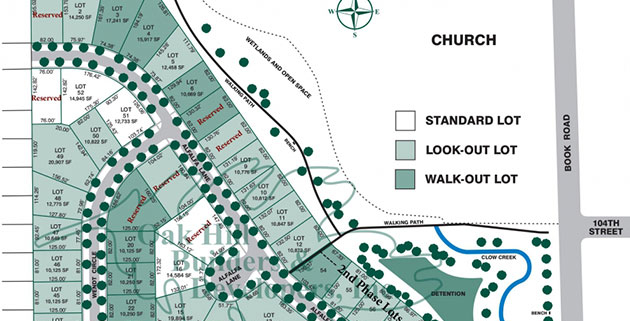 A subdivision featuring more than 60 custom-built, single-family homes and a memorial to one of the first families to settle the area that is now south Naperville won a unanimous recommendation from the Naperville Planning and Zoning Commission.

Members of the advisory committee reviewed plans last week calling for 61 houses on 31.5 acres of land just southwest of the Book Road and 103rd Street intersection upon annexation into the city. Developer, Nick Stanitz of Oak Hill Builders and Developers is responsible for the Stillwater and Ashbury subdivisions in Naperville.
“I think this is a logical infill piece to me. It’s one of the last remaining undeveloped pieces on the south side,” said Commissioner Carrie Hansen. “The builder has an excellent reputation and I think adjoining homeowners are going to be pleased.”

Average lot size is expected to be 12,500 square feet — larger than the surrounding development, which average less than 9,000 square feet, said Len Monson, the attorney for Oak Hill Builders.

The developer’s proposal incorporates 7.83 acres of open space that would include benches and a six-foot-wide trail weaving through the development. While the plans also include two deviations from city code — a reduction in interior side yard setback and in lot area for two lots — commissioners said the variances are minor and consistent with the surrounding residential developments.

City of Naperville officials advised against using the current driveway off Book Road as an entrance or exit from the development, Monson said. Instead, access to the subdivision would be provided by via the current Alfalfa Lane at its intersections with both Schillinger Drive and Haider Avenue in the existing Clow Creek Farm subdivision.

The proposal also includes a monument dedicated to the Clow family, one of the original Will County settlers. Robert Clow bought the property in 1844.

“My client will be erecting a memorial to the Clow family to be designed in cooperation with the Clow family,” Monson said. “Our initial thought is there’s some old stone buildings on the property and (we will) use those stones to create a memorial and have a plaque in honor of the Clow family and as a recognition of our heritage here in Naperville.”

The memorial would be erected adjacent to Book Road, Stanitz said.

The 31.5 acres contains buildings left from the farm, and the property has been planted and farmed for years, said Bill Novack, director of Naperville’s Transportation, Engineering and Development department. Annexation of the property wouldn’t open up any additional land to be annexed into the city, Novack said.

The property is currently zoned as agricultural and would need to be rezoned to residential.

Commissioner Robert Williams called the proposal an “outstanding development” with “outstanding cooperation between the developer and the residents in the surrounding area.”

A petition signed by 48 neighboring property owners was submitted in support of the development, and the Clow Creek Farm Homeowner’s Association — of which the 61 houses would be a part — also backs the proposal.

The developer plans to plant 250 new trees and do “a lot of work” around the creek that runs through a portion of the property for stormwater detention, Monson said.

City of Naperville staff supports the rezoning due to consistency with the area. The proposal must be approved by the Naperville City Council before building can begin.